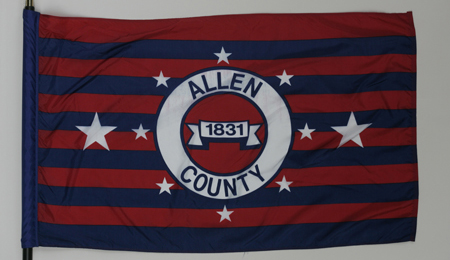 The Allen County flag was designed in 1992 by Anthony (Tony) Mikesell, a sophomore at Bath High School. He came up with twelve stripes of red and blue to represent the twelve townships, eight small white stars for the county's incorporated villages, two larger white stars for the two cities, and a large white circle for the State of Ohio. Also included are the name of the county and the year of its founding. Tony chose the colors of red, white, and blue throughout the flag to signify our allegiance to the United States of America. The county was named for either Revolutionary War hero Ethan Allen, or John L. Allen from the War of 1812. The 111th Ohio General Assembly designated John Allen as the person for whom Allen County is named, based on research by Helen Winemiller Wood, a resident of Allen County.