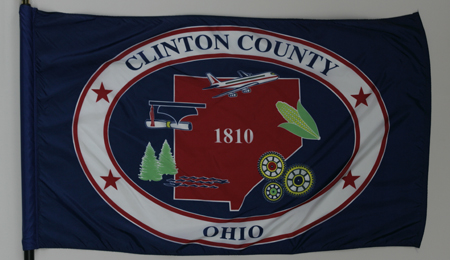 While preparing for Ohio's Bicentennial, the Clinton County Commissioners decided to update the old 1970s county flag designed by Howard Hackney. In 2002, after receiving many entries, the flag committee decided to use ideas from each submission, but to base the new flag on a concept by Russ Monjar of Blanchester. This red, white and blue flag has colorful symbols in the center oval. An airplane and gears represent the local economy. Corn, trees and water show the important natural resources, and a cap and diploma remind us of education. Four stars surround a red map of Clinton County. The county was named for George Clinton, the US vice president in 1810 when it was formed.