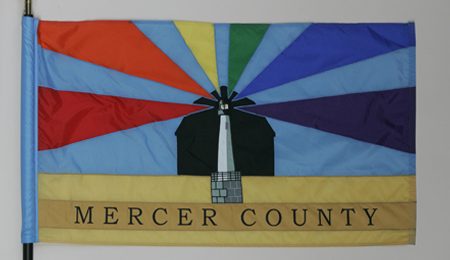 On April 4, 2002, the County Commissioners adopted this official county flag for the first time in its history. The celebration of Ohio's 200th Birthday was the catalyst for the endeavor. Over thirty designs were received from students, residents and workers of Mercer County. The commissioners accepted the flag created by a group of nine individuals employed by Fanning/Howey Associates located in Celina, the county seat. The flag is colorful, yet simple, and clearly represents the pride of the community. Agriculture is represented by a silhouette of an 1800's style barn. Three amber bands across the bottom represent the different colors of crops as they ripen and are ready for harvest. The lighthouse signifies Grand Lake, the largest man-made lake in Ohio. Beams radiating from the lighthouse stand for all six Mercer County schools: red for St. Henry, orange for Coldwater, gold for Parkway, green for Celina, blue for Marion Local, and purple for Fort Recovery. The flag committee added one final touch to the design. The foundation of the lighthouse was modified to have fourteen stone blocks. Each block represents one of the townships. The county was named after General Hugh Mercer of the Revolutionary War.