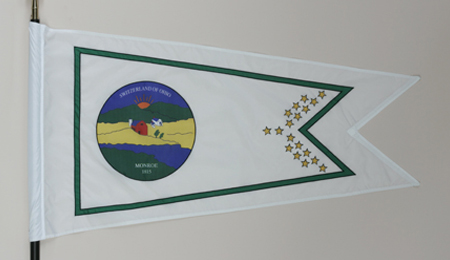 The Monroe County Flag was designed by Dennis Sawyers of Hannibal, Ohio, through a contest run by the Monroe County Beacon newspaper and the County Commissioners. The 1986 contest was a response to the county learning that any county without a flag would be represented by a white flag at the state capital. The flag is a white pennant with a green stripe around the border. The 18 stars represent the townships in the county. The round picture contains blue to represent rivers and lakes, gold for fields, green for forests and rolling hills, a rising sun to represent opportunity, and a farm house and barn to represent the farming community.  The picture is labeled "Switzerland of Ohio." Monroe County was organized in 1815. It was named for James Monroe who was U.S. Secretary of State at the time.