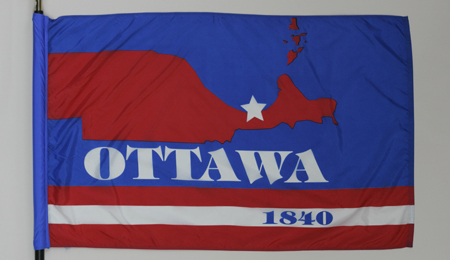 The commissioners held a contest with the local schools to create a county flag. They received the initial flags and chose finalists and ask them to incorporate a star for the county seat and the date of 1840. So the drawings were revised and Edward Liske of Oak Harbor was selected as the winner. Liske was awarded a $1,000.00 scholarship and the runner received a $500.00 scholarship. The flag was adopted on May 14, 2002. This red, white and blue flag features the outline of Ottawa County on a blue field. The name of the county appears in large white letters. At the bottom, there are two red stripes and a white stripe with the date 1840, when the county was established. The county was named for the Ottawa tribe of Native Americans. In their language, Ottawa means, "trader."