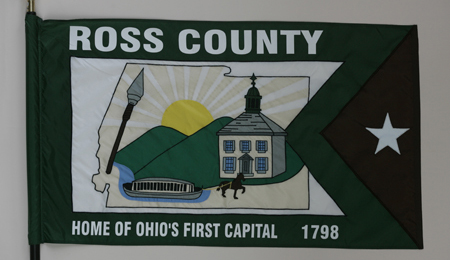 In response to the request from the Ohio Bicentennial Commission, all Ross County schools were invited to participate in "Leave a Legacy: Design a Ross County Flag." In 2002, entries from each district were judged by a panel of Commissioners and educators. The winning entry was a team effort by 150 fourth grade students of art teacher Sharon Eley at Unioto Elementary School. Graphic designer, John Catlett created the final version of the Ross County Flag. The flag was adopted by the Ross County Commissioners on December 27, 2005. Symbols on the flag represent Tecumseh (the arrow), Adena and the Great Seal of Ohio (hills and sun), Chillicothe as the first capital of Ohio (statehouse), mule and canal boat (Erie Canal route), and the star for WWI veterans. The fourth grade children wanted the WWI soldiers represented, because many of their grandfathers and great-grandfathers served in that war. The outline of the county is also imaged on the flag. Ross County was established in 1798. Territorial Governor Arthur St. Clair named the county after his friend, James Ross, a U.S. Senator from Pennsylvania.