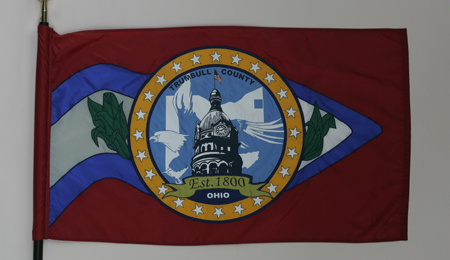 This county flag resulted from a 2002 contest to prepare for Ohio's Bicentennial. A portion of each age group's winning entry was included in the final design. A local artist Jay Sylvester is responsible for the bringing the pieces together into the flag we see today. The white stars stand for twenty-four townships on a field of gold which represents pride in the county. Corn stalk leaves represent agriculture. The six leaves on the left stand for the cities: Warren, Niles, Girard, Hubbard, Cortland and Newton Falls. The five leaves on the right are for the villages of Lordstown, McDonald, West Farmington, Orangeville and Yankee Lake. In the center circle (O for Ohio), the rotunda of the county courthouse is highlighted. The time on the courthouse clock is 9:11, in commemoration of those who lost their lives during the terrorist attacks on the United States on September 11, 2001. The background of the center depicts the location of Trumbull County within the State of Ohio. It also shows the county is a perfect square. The American Bald Eagle is a symbol of patriotism. Trumbull County is one of the few in the state that currently (2002) has nesting pairs of our national symbol. The crimson background is a symbol of bravery. It is a reminder of the blood sacrificed by our ancestors for the freedom we enjoy today. It is also a tribute to all veterans from Trumbull County. Slate gray is for steel manufacturing. White stands for hospitals, health services, and a clear bright future. The blue ribbons symbolize the Mahoning, Grand and Shenango Rivers and other waterways. The blue arrow stands for aviation and also directs us forward to prosperity. The county was established in 1800, and named for Jonathan Trumbull, Governor of Connecticut to remind us of the Connecticut Western Reserve.