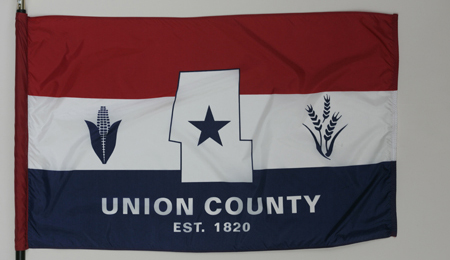 The Union County flag was designed in conjunction with the Ohio bicentennial celebration. The red, white and blue field shows an outline of Union County in the center of the flag. A large star appears in the center. On the white stripe, the ear of corn on the left and the heads of wheat on the right are representative of the county’s agricultural heritage. The flag was designed by Jeremy Bolin, a student at Fairbanks High School, as part of a county-wide contest. His entry was selected by three graduates of the Columbus College of Art and Design. It was adopted as the county flag by the County Commissioners on December 5, 2002. Union County was established in 1820 from portions of the Delaware, Franklin, Logan and Madison Counties along with portions of Native American territory, and the county name is derived from the union of these many parts.