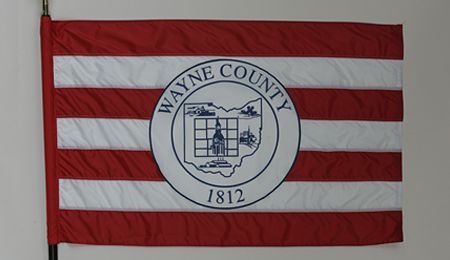 The Wayne County flag was designed by Emblem Club member Geneva Johnston in 1987. The project was requested by Helen Critchfield of the Wayne County 175th Celebration Committee. The Wooster Emblem Club was chosen because of their promotion of flag display and their work for Americanism. This red, white and blue flag centers on a version of the county seal. It features a circle around and outline of Ohio. Inside the outline is an enlarged map of the county. Several images which also appear are a farm representing agriculture, a hand for education, some buildings representing churches, and a factory for industry. The clock tower of the County Courthouse was added to Johnston's design by request of the county commissioners. The flag's background is made of seven stripes, four red for the four original townships and three white recalling Wayne's status as the third territory in the United States. The county was named for Major General Anthony Wayne of the Revolutionary War, the Treaty of Greenville and the Battle of Fallen Timbers. It was organized in 1812.