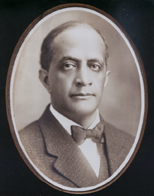 A. Lee Beaty was born in Cincinnati on September 2, 1869, and lived there throughout his life. His father, Powhatan Beaty, had received the Congressional Medal of Honor for bravery and meritorious conduct during the Civil War. Because his father worked at the Lincoln and Blaine Clubs, Beaty was exposed to politics at an early age. After attending public schools, Beaty worked as a law clerk and then went to Washington, DC as an clerk for the post office. Later, he returned to Cincinnati, became a mail carrier (a prestigious position in his day), and attended law school at the University of Cincinnati.

After law school, Beaty married Bessie Buckner, established a law practice and began acquiring real estate. By 1926, Beaty had accumulated large real estate holdings and was living with his family in the East End near Broadway, an elite African American neighborhood.

Beaty earned success and the respect of his community, which was reflected in his appointment as Assistant U.S. District Attorney for Southern Ohio and his service as trustee of the African Methodist Episcopal Church.

During the 82nd General Assembly, Beaty introduced House Bill 227, "To Prohibit the Representation, by Lithograph, Drawing, Picture, Play, Drama or Sketch of the Hanging, Lynching or Burning of a Human Being, and to Provide a Penalty Therefore." In presenting this bill, Beaty took the floor and made what was generally considered to be the most eloquent address ever heard from an African American in the Ohio House of Representatives. Upon the speech’s conclusion, the House responded by unanimously voting for passage of the bill.