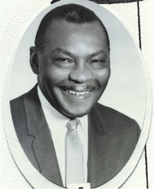 David D. Albritton was born in Danville, Alabama, in 1913 and grew up in Cleveland on Cedar Avenue near East 71st Street. He was an amateur boxer and in high school cleared six feet, three inches in the high jump. During his college years at The Ohio State University in Columbus, Albritton became a Big Ten Champion and world record high jumper. He competed in the 1936 Olympic Games in Berlin, where, with a leap of six feet, six and three-quarters inches, he won the silver medal in the world championship high jump. When Albritton was thirty-six years old, in 1948, he again tried out for the Olympic team in New York and was able to pass the six feet, seven inches mark.

In his student days at OSU, Albritton received a much needed working scholarship as a page in the Ohio House of Representatives and Ohio Senate. After graduation, he worked as an industrial arts teacher at Dunbar High School in Dayton. While coaching for Dunbar, he led his teams to three state titles. In addition to his teaching and coaching, Albritton operated an insurance business for more than thirty years. He was also a family man, raising a son, David II.

The voters of his district elected him to the Ohio House of Representatives in 1960. In the House, he served on the Education, Insurance, and Taxation Committees. When he took over the Interstate Cooperation Committee in 1969, Albritton became the first African American to chair a House committee. He proved a popular representative, completing six terms in the General Assembly.

Later in life, Albritton served as a trustee of Wright State University. He successfully campaigned to have a street named after Olympic track star Edwin Moses. Albritton's athletic achievements were publicly honored when he was inducted into the National Track and Field Hall of Fame, the Ohio State Athletic Hall of Fame, and the Ohio Sport Hall of Fame.