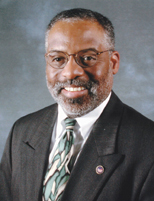 Senator Michael White grew up in Cleveland and attended Glenville High School. He earned a bachelor's degree in education and a master's degree in public administration from Ohio State University. In the mid 1970s, he served as an aide to then Columbus Mayor Tom Moody. White returned to Cleveland in 1977 to represent the community of Glenville on Cleveland's City Council. He served on the Finance Committee and was a chairman of the Community Development Committee before his appointment to the Ohio Senate in 1984.

In the Ohio Senate, White authored Ohio's spousal rape provisions and sponsored legislation to increase the penalties for rape. He also sponsored anti-drug legislation, establishing Ohio's toughest penalties for drug-related crimes. White also helped provide prescription drug benefits for the elderly. In 1985, the voters returned White to the Senate, where his peers twice placed him in leadership positions and where he served on the Judiciary, Ways and Means, Rules, and Health and Human Services Committees.

Cleveland is still amidst one of its most significant housing booms since the 1950s. Partly as a result, the city has built two new recreation centers and renovated 77 playgrounds and parks. White's determination to improve public education and race relations has drawn citywide support and national attention. In recognition for his accomplishments as mayor, White was selected to serve as President of the National Conference of Democratic Mayors and as a member of the Board of Trustees for the United States Conference of Mayors.

On May 23, 2001, Mayor White set a date for the ending of his tenure as Cleveland mayor. He announced he would not run for a fourth term, saying he wished to spend more time with his family.