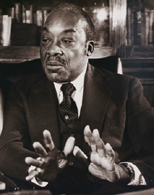 Phale D. Hale was born in Starksville, Mississippi, on July 16, 1915. He graduated from Greenwood High School in Greenwood, Mississippi, and continued his studies at Morehouse College. Hale attended Gammon Theological Seminary and Chapel Theological School, from which he received his Doctor of Divinity degree in 1948. In 1940, Hale became the pastor of the First Baptist Church in LaGrange, Georgia. He led the Union Baptist Church in Fort Wayne, Indiana, from 1945 to 1950. In 1950, he moved to Columbus to become the pastor of Union Grove Baptist Church, where he served for many years.

Hale has devoted his life to religion, politics, and community service. He was elected to the Ohio House in 1966. During his tenure there, he became deputy director of the Democratic National Committee, Chairman of Human Resources in the Ohio House of Representatives, a member of the Ohio Civil Rights Commission, and Coordinator for the Clergy for the Black Elected Officials of Ohio. In 1995, Hale again became a member of the Democratic National Committee, this time through appointment by President Clinton.

Hale played an active role in the community as the president of the Columbus Chapter of the National Association for the Advancement of Colored People (1950-1960), chairman and board member of American Baptist Theological Seminary (1957-1983), and director of the Social Action Commission of the Ohio Baptist General Convention (1960-1992).

He also served on the Columbus Area Anti-Poverty Council. He was director of Housing and Economic Cooperation, Inc. He was a member of the Elks, the Masons, the Baptist Pastors Conference, the Inter-Denominational Ministerial Alliance, and other local, state, and national religious organizations.

Hale was a founding member of the BEDO, now refered to as the Ohio Legislative Black Caucus.

Hale has served as a lecturer, preacher, and consultant to churches, colleges, and universities. He is presently retired.