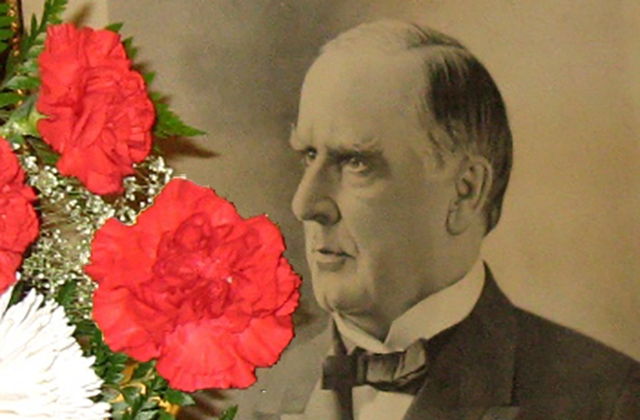 The staff of the Ohio Statehouse Museum Education Center will offer a free public tour in honor of the Red Carnation.  The special tour of the Ohio Statehouse will talk about architecture, art, history, and state government throughout the building. President William McKinley and his important roles in Ohio and the United States will be featured during the noon tour on January 28.  The event is open to the public, and no reservation is required.

The 2022 observance of Red Carnation Day will include a small exhibit about the life and legacy of Ohio Governor and President William McKinley. The exhibit will be on display in the Rotunda January 28-31.

Save 20% off your entire purchase at the Statehouse Museum Shop on Friday, January 28, 2022 if you are wearing a red carnation or dressed in scarlet. This sale excludes postage, wine, food, nylon flags, consignment items, wooden Statehouse Cutout, dated Statehouse ornaments, and the books, Art and Artistry of the Ohio Statehouse and From Cornerstone to Cupola. Discount applies to in-stock items only, and cannont be combined with any other discount. The Shop is in the Map Room on the ground floor of the Ohio Statehouse.

Sale with HouseTaco at the Capitol Cafe