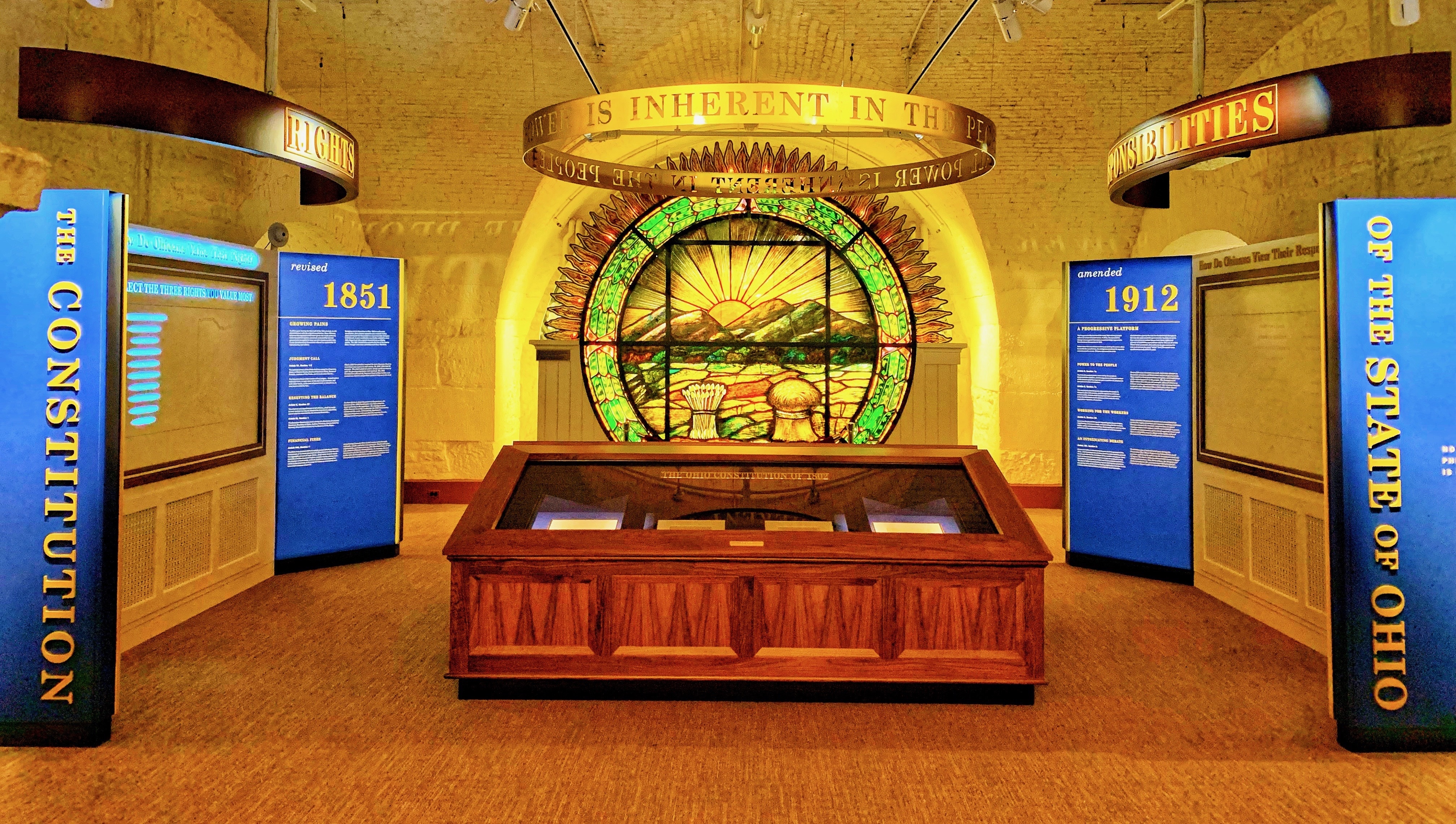 Ohio Statehouse Museum Education Center offers exhibits that encourage visitors to participate in the state government process by making decisions, expressing their opinions, comparing viewpoints and by voting. The exhibit challenges visitors' knowledge about the workings of state government, while equipping them to more fully participate as citizens.

Constitution of the State of Ohio

The Ohio Statehouse Museum features Ohio’s Constitutions in the central exhibit area where pages of the historic documents are on display.  Visitors may view handwritten pages from the 1802 and the 1851 Constitutions.

Read the current Constitution of the State of Ohio here.

The Ohio Statehouse Museum features a documentary series of videos highlighting the national significance of the Ohio Constitution — from its critical role in the slavery abolition movement to how it set a national model for the funding of public education. The videos are also available on this webpage to watch before and after your Capitol visit.

The 1787 Northwest Ordinance, written by Nathan Dane, was the first major antislavery legislation in American history.

An alliance of Native Americans resisted settlement into Ohio.  With the 1795 Treaty of Greene Ville, they ceded much of the land that would become Ohio in exchange for promises of peace in the northwest areas.  Arthur St. Clair opposed statehood for Ohio and lost his job as territorial governor.

Ohio becoming a free state set a precedent for other states.  Rufus Putnam and Ephraim Cutler fought for the continued prohibition of slavery in the Ohio Constitution.

Many Ohioans participated in both the abolitionist and Underground Railroad movements, including Salmon Chase, John P. Parker and Harriet Beecher Stowe.  The Ohio Constitution laid a foundation for civil rights that abolitionists could draw from to expand those rights to include African Americans.

Canals and railroads revolutionized Ohio and our nation.  The 1851 Ohio Constitution limited state debt and also the ability of the state to grant exclusive privileges to private companies.

Using your rights responsibly required that you be educated.  Caleb Atwater, Samuel Lewis and Calvin Stowe were behind common schools in Ohio.  The 1851 Ohio Constitution guarantees there will be state funding for public education for Ohioans.

Credits and more information about the videos