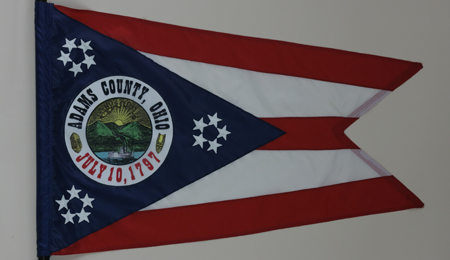 The Adams County Flag follows the pattern of the Ohio State Flag. This red, white and blue burgee shaped flag was designed by Stephen Kelly. Three red stripes remind us that Adams County is the third oldest county in Ohio. It was established on July 10, 1797. The round seal is reminiscent of the Great Seal of the State of Ohio. The image includes the Ohio River and the beautiful hills of Adams County, and adds a riverboat and an image of the Serpent Mound, the county's most notable landmark. A Clovis Paleo Indian point and an Isotelus trilobite signify the rare geological artifacts that can be found in the area. The white stars represent fifteen townships. The county was named for President John Adams, who was in office when Adams County was organized.