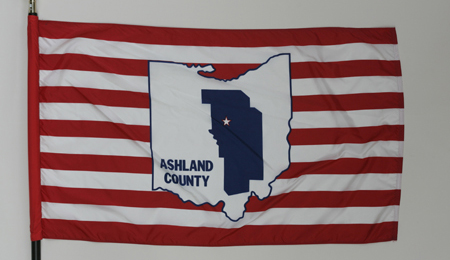 Ashland County's flag displays the red, white, and blue of both Old Glory and the state banner of Ohio. The symbolism in the county flag tells the story of county government. Ashland, the county seat, is starred, with the placement of the county within the state of Ohio, illustrating the fact that county government is an arm of state government. The l3 red and white stripes portray the American flag and the relationship between counties and the federal government. This is indicative of working together on various grants and numerous federal mandates. Caralou Mitchell (Mrs. Dean) of Perrysville designed Ashland County's flag, winning a contest created by the county commissioners in 1986. Minutes record that Caralou explained her design, saying "the thirteen red and white stripes represent this great country of ours and Ohio which has it all." She added a green star for Ashland, the county seat, for Ashland County which is "really on the go." We had to revise the drawing and change the green star to a white star outlined in red to save cost of production. The county was named after "Ashland", the Kentucky estate of US Senator Henry Clay.