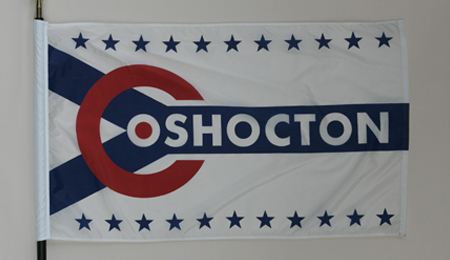 The Coshocton City Council adopted the Coshocton Flag design in 1971. Karen Uher, a 13 year old girl, won the contest sponsored by the Chamber of Commerce. The flag was officially adopted as the county flag in 2003. The flag design contains twenty-two blue stars, which represent each township in Coshocton County. The "Y" configuration represents the Walhonding river and the Tuscarawas River that meet at Coshocton City to form the Muskingum River. The red dot inside the O reminds us of the Ohio flag. This red, white and blue flag spells out the name Coshocton with a large red letter C. The name Coshocton sounds like the Native American village name for "Black Bear Town" or "where there is a river crossing."