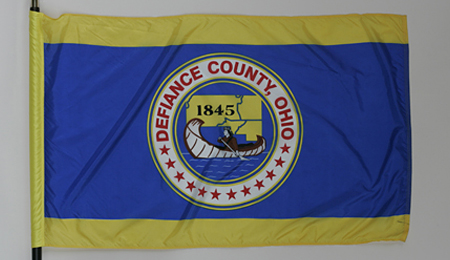 The Defiance County flag was designed in 2002. The County seal is housed in the middle of a blue stripe between two yellow borders. The seal was designed in the late 1970’s by a local historian, who decided on the circular shape so that it was similar to the State seal. The outline of the County is to show the confluence of the three rivers: Tiffin, Auglaize and Maumee. The trapper or trader in the canoe is a symbol of when Defiance was a trading center for the Native Americans and early fur traders. The twelve stars represent the townships: Adams, Defiance, Delaware, Farmer, Hicksville, Highland, Mark, Milford, Noble, Richland, Tiffin, and Washington. Defiance County was established in 1845 and named after Fort Defiance, built by Anthony Wayne in 1794.