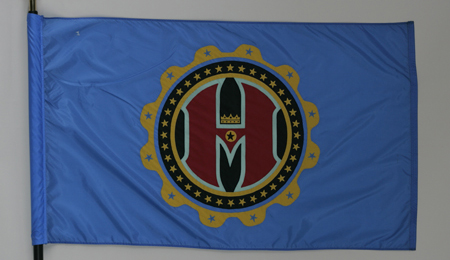 The Hamilton County flag was selected from ninety-five entries from local artists and students. The flag development process was a partnership between Hamilton County and ArtWorks, a local non-profit that provides training and opportunities in the arts for local youth. ArtWorks sought entries from local schools, the general public and its own network of local artists. A panel consisting of County officials, citizens, and ArtWorks staff helped select three finalists and the final design. The winning design was created by Justin Green, a graphic artist from Oakley. The flag was adopted on June 14, 2002. The flag features a red "H", trimmed in green symbolizing Hamilton County. The "H" is encircled by an "O" representative of Ohio. Hamilton County's twelve townships are symbolized by the "cogs" of the circular motif. The flag includes thirty-seven yellow stars representing the twenty-one cities and sixteen villages of Hamilton County. To the original design, twelve blue stars were added on the "cogs" at the request of County Auditor Dusty Rhodes, who said that townships also deserved stars. The county is named after Alexander Hamilton, the first U.S. Secretary of the Treasury. It was established in 1790.