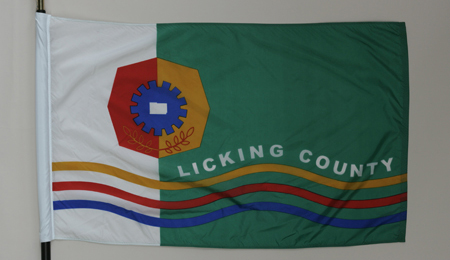 This flag takes the place of a missing county flag. The former Licking County flag was designed by student Brandy McCluskey of Utica in 1986, but the flag had disappeared and nobody in the county building could remember its design! They thought that it had been sent to the Ohio State Fair and never returned. The process of designing the current Licking County flag began when the Commissioners contracted with A & D Advertising, best known in Licking County for their design work. Christine Diebold met with the Commissioners over a period of time discussing the meaning of the flag and the representation of Licking County. After several drafts and during County Government Week, Student Government representatives picked the winner from five models submitted. The current flag was adopted in July, 2002. The octagon shape represents the earliest settlements in Licking County. The Octagon Mounds are earthworks built by the Hopewell Indians. The industrial cog in the center of the mound represents Licking County's strong industrial base. The white outline of Licking County depicts the shape and size of the second largest county, by landmass, in the State of Ohio. The color green and the grain symbolize agriculture and the many farm families who make their homes in Licking County. The county is named for its principle stream, called the ¿Licking River¿ by pioneers, but "Pataskala" by Native Americans. The name refers to salt licks in the area.