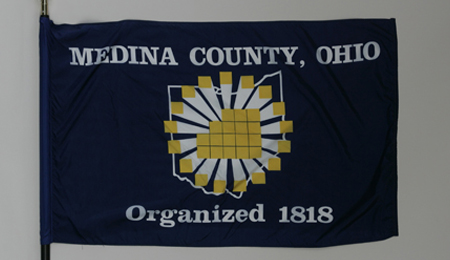 In February 1990, the county commissioners sponsored a flag design contest in cooperation with the Medina County Historical society, the Medina County Gazette, the Old Phoenix National Bank, and the Medina County School District. Four designs were chosen from 72 entries, and were published in the newspaper for voting by the public. The winning design was submitted by Calvin A. Ganyard, a lifelong resident of the county. The flag was officially adopted on July 30, 1990, when Ganyard said, "to all Medina County residents, past, present, and future: this Medina County Flag is for you." The flag was created using bold contrasting colors, striving for simplicity and recognizability. The white lettering and date tell everyone "who we are and when we started," according to Ganyard. The design incorporates a royal blue background with the outline of the State of Ohio, and the shape of the county in gold. Radiating from the center of the county, as in a starburst, are the shapes of the seventeen townships, also in gold. The county was named after the city Medina in Arabia, the town to which Mohammed fled from Mecca.