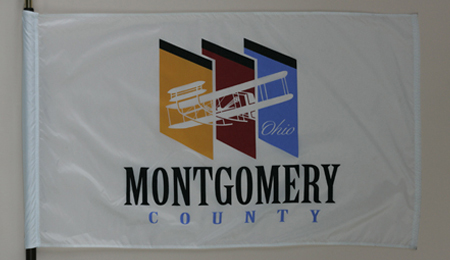 The Montgomery County flag was designed by Kevin Montgomery, a designer for a local public relations firm, Flynn Sabatino and Day. His last name is a coincidence. The design project involved the Administrator, Communications Director and the public relations firm. The flag was adopted in the summer of 2001. It replaced the former 1973 Montgomery County flag by Jim Moyer. The flag features the county logo as seen on the county's water tower near I-75. The colors for the logo and flag were chosen because they are classic. The Wright B Flyer symbolizes innovation, which the area and government are known for. The county was named for General Richard Montgomery of the Revolutionary War.