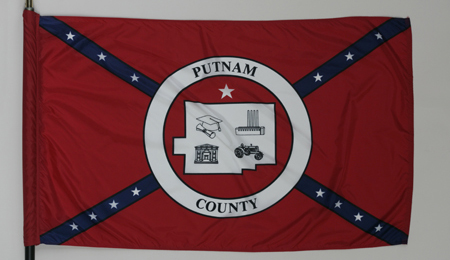 The Putnam County flag was designed as part of a flag and seal contest open to all students in kindergarten through grade twelve. On July, 1, 1992, the contest was won by a seventh grader, Robbie Andrews of rural Ft. Jennings. The flag is red, white and blue, and represents a number of important facts in Putnam County's society. Red stands for those residents of Putnam County who gave their lives to defend the country in all the armed conflicts. White is for adults and the present. Blue represents the children and the future of Putnam County. The star at the top of the flag represents the county seat of Ottawa and Ottawa Township. The other fourteen stars stand for the other villages and townships. The cap and diploma symbolize the importance of education. The court house represents government. The factory signifies industrialization which is important now and in the future. The impact of agriculture is symbolized by the tractor. These images appear on a white silhouette of Putnam County. The county is named after Major General Israel Putnam of the Revolutionary War.