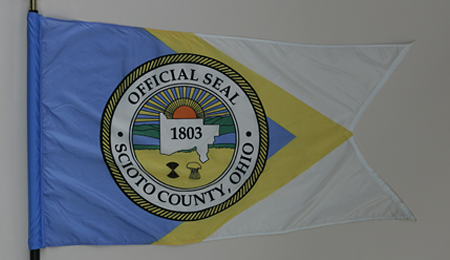 This burgee is the same shape as the Ohio State Flag. The background is blue, yellow and white. The Official Seal of Scioto County appears in the center, and is reminiscent of the Great Seal of the State of Ohio. An outline of the county shape is in the middle. This flag replaces a previous 1986 flag designed by Amy Brown, which was a white burgee. Scioto County was established in 1803. Its name comes from the Scioto River which runs through it, and from a Native American word meaning "deer." Sources: Knepper, George W. ed., Tanya West Dean, and W. David Speas. Along the Ohio Trail: A Short History of Ohio Lands. Columbus: Auditor of State, Jim Petro, 2001. Purcell, John. 2007. Personal communication.