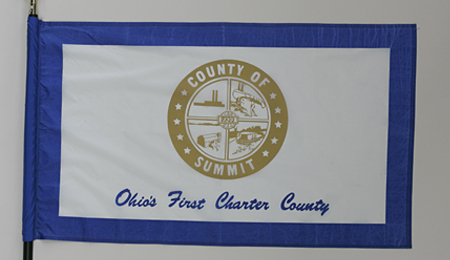 The official flag of County of Summit was adopted by Summit County Council in April 1988. The flag showcases a gold county seal, designed in 1981 by George F. Seigman, which represents the following four important eras in Summit County history: ¿ The factory and manufacturing industry that bolstered the county's economy in the late 1800s and throughout most of the 20th Century. ¿ The land area that was to become Summit County was the western-most point of an area known as the Western Reserve. The Western Reserve originated in Connecticut and stretched into Ohio. It was mostly a wilderness area and home to many Native American tribes. ¿ Summit County was a major stop along the Ohio and Erie Canals. In fact, some of the locks along the canal route were preserved and can be seen today. The name "Summit" is the result of the county being one of the highest points along the canal route. ¿ Before Summit County became a thriving manufacturing center, many of the people who lived there made their living by farming. Summit County was an attractive place to farm because of the fertile soil and the abundance of fresh water sources. The blue trimmed, rectangular, white banner also highlights the fact that Summit County is "Ohio's First Charter County." The county was established in 1840.