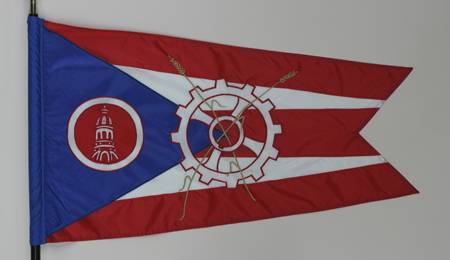 The Van Wert Business and Professional Women's Club sponsored a contest to design a County Flag for the Bicentennial Celebration. The flag designed by Mr. Rolland Blank Sr. of Van Wert, Ohio. The winning design is unique in that it is symmetrical and appears the same when viewed from either side. The flag is red, white and blue and takes its general shape from the State Flag of Ohio. In a red bullet on a blue field is the tower of the Van Wert County Courthouse. The Courthouse, a National Historic Landmark, is listed in the U.S. Department of the Interior's National Register of Historic Places. Over the red and white stripes is interposed a gear with stalks of wheat intertwined. The wheat is symbolic of the county's rich agribusiness while the gear represents Industry. The cogs on the gear represent the twelve townships in Van Wert County. The county is named for soldier Isaac Van Wert, who helped capture British spy, John Andre in the Revolutionary War. The actual spelling of his name, "Van Wart," was changed because of illegible writing in Congressional records.