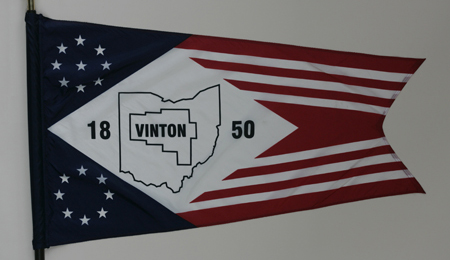 This red, white and blue flag is reminiscent of the Ohio State Flag and also the American Flag. Like the Ohio Flag, its shape is a swallowtail burgee. There are circles of eight and nine white stars. There are six white stripes and seven red stripes. In a central diamond, an outline of Vinton County appears inside an outline of Ohio. Vinton County was established in 1850. It was named for Ohio Statesman Samuel Finley Vinton, a U.S. congressman known as "the Father of the Department of the Interior."