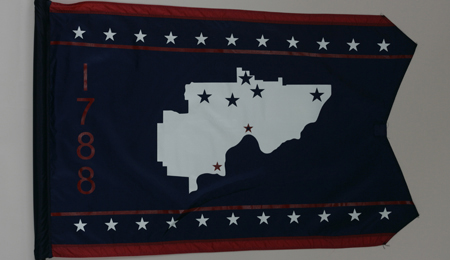 Washington County's flag was designed under the guidance of former Commissioner Wayne Schafer by WASCO Workshop employees for the county's bicentennial in 1988. The uniquely shaped flag is red, white and blue. White stars represent twenty-two townships, two scarlet stars are for the cities of Marietta and Belpre, and five blue stars are for the villages. The white stars outline the perimeter of the flag, and the other stars take their place inside a white outline of the county. Huge red numerals designate Washington County's senior status among all of Ohio's counties. Washington County is Ohio's first county, and was established in 1788. It was named for George Washington, who was president of the Constitutional Convention at the time the county was formed.