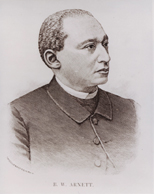 Born in Brownsville, Pennsylvania, in 1838, Benjamin Arnett was the grandson of Samuel and Mary Louise Arnett. Young Arnett's racial and ethnic heritage made him half African American, three-eighths Scots, one-sixteenth Native American, and one-sixteenth Irish. He attended a one-room school near Brownsville, taught by his father's brother Ephram Arnett. In his early year, Arnett worked a variety of jobs; he loaded wagons as a wagon boy, waited tables in hotels, and labored on steamboats on the Oho, the Mississippi, and adjacent waters. He waited tables in hotels.

A tumor on his leg led to its amputation in March, 1858, but he continued to work and rise in spite of physical problems. He received a teacher's certificate on December 19, 1858, becoming the first and for a time the only African American teacher in Fayette County, Pennsylvania. For ten months during the 1864-1865 school year, he taught and served as a principal in a Washington, DC school. He then returned to Brownsville and taught there until 1867.

Brown, who had joined the A.M.E. church in 1856, became licensed to preach in 1865 at the Baltimore Annual Conference in Washington, DC. His first appointment was at Walnut Hills in Cincinnati in 1867. He was ordained a deacon the next year and, in 1870, was ordained an elder by Bishop Daniel A. Payne in Xenia, Ohio. He was assigned to some of the wealthiest and most prestigious churches in the conference, eventually serving as longtime pastor of Allen Temple in Cincinnati.

In 1880 and again in 1884, Arnett was elected financial secretary of the A.M.E. Church, a position that allowed him to settle permanently in Wilberforce, the intellectual center of the church in Ohio. In 1885, the Wilberforce College faculty chose him to run for the Greene County Republican legislative nomination, in order that he might eventually lobby for state aid. Arnett won the nomination, the election, and support for Wilberforce in the form of a state facility on campus. He served in the Ohio House of Representatives from 1886 to 1887.