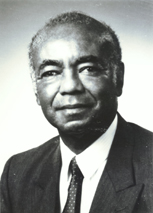 C. J. McLin was born in East St. Louis, in the small community of Fireworks Station, Illinois, on May 31, 1921. When McLin was ten, his family moved to Dayton, Ohio, where his father operated a funeral home. Later, McLin recalled growing up in poverty. He attended public schools and characterized himself as an average student with a talent for civics. He also assisted his father in the family business.

In 1940, he attended Virginia Union University. He believed his participation in a lunch counter protest and lawsuit against the McCrory five and dime store in downtown Dayton led to his being drafted into the Army. During his three-year stint in the Army, McLin continued to face and fight discrimination. In 1950, after completing his studies at the Cincinnati College of Embalming, he returned home to the family business.

McLin decided to enter politics after reflecting on his experience in the army, when he had witnessed numerous examples of discrimination. He said that, at first, anger got the best of him, but ultimately he decided to take the high road. Years later, reflecting on the importance of protest against injustice, McLin wrote that he admired Martin Luther King Jr. and Jesse Jackson. He said Jackson accentuated and punctuated our Blackness. Jesse always reminds White people that they must deal with us, and that we cannot be ignored.

In 1958, McLin founded the Democratic Voter's League, an organization that took an assertive political stand and demanded that the Democratic Party assist blacks in obtaining quality jobs. In 1966, McLin was elected State Representative, a position he held until his death. That same year he founded the Black Elected Democrats of Ohio and served as its first president. Today, the organization is known as the Ohio Black Legislative Caucus. It has helped African American legislators gain power in the legislative process.

McLin always demonstrated concern for the plight of the underprivileged. He consistently influenced his colleagues to enact legislation that would enhance the lives of minorities and blue-collar workers. Among his many accomplishments was the development of the Bella Vista Estates and West Carrollton Housing Projects, both of which provide hundreds of modern units to low-income families. He also supported legislation to provide for inspections of county-owned nursing and rest homes.

He sponsored legislation establishing the Wright State University's Schools of Medicine and Professional Psychology, the Dayton Career Academy for Vocational Rehabilitation, the Miami Valley Regional Art and Cultural Council, and the Renewal of Downtown Dayton. State funding for the National Afro-American Museum and Cultural Center in Wilberforce, Ohio is one of McLin's greatest legacies. In 1972, he spearheaded state legislation to create the museum, and was a driving force through the development and construction of the first phase of this national institution.