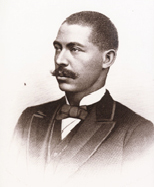 George Washington Williams was a late 19th Century African American journalist, lawyer, minister and historian who wrote the first comprehensive history of African Americans from their own point of view. Called the greatest historian of the race by W.E.B. Du Bois, Williams authored the two-volume History of the Negro Race in America from 1619 to 1880: Negroes as Slaves, as Soldiers, and as Citizens, together with a preliminary consideration of the Unity of the Human Family and historical Sketch of Africa and an Account of the Negro Governments of Sierra Leone and Liberia.

Williams had already enjoyed prominence from such previous achievements as founding a respected black national newspaper (the Commoner) and becoming the first black member of the Ohio state legislature. But he won widespread fame with the publication of his book, which eventually led to an assignment by a press syndicate to write a series of articles from Europe. There he interviewed Belgium's King Leopold II about his newest territorial possession, the Congo. Williams later traveled to the Congo hoping to find the Christian model of benign rule that Leopold claimed he had established. What Williams actually saw moved him to produce what is regarded today as one of the seminal pieces of investigative journalism on human rights.

In a published open letter to King Leopold in 1890, Williams documented the massive enslavement, torture and killing of Africans by the king's subjects. Using eyewitness accounts, letters, and official records, Williams became the first to shatter the kings carefully cultivated image of his rule of the African territory. The letter created a furor throughout Europe and America. Newspapers on both continents called for thorough investigations, and the Belgian Parliament wrestled over the king's veracity. The charges Williams brought against Leopold helped inspire an international human rights protest movement against Leopold's rule in the Congo. Upon completing his African journey, Williams contracted tuberculosis and died in Blackpool, England in 1891.