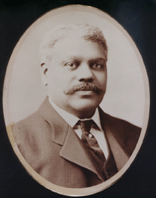 Son of a Civil War soldier in the Union Army, H.T. Eubanks was born in Stanford, Kentucky, in 1853. His father died when Eubanks was still a boy. Young Eubanks worked as a laborer in the streets of Louisville, Kentucky, to help his mother support the family.

As a young man, Eubanks earned his living as a waiter. He worked as a headwaiter in some of the leading hotels in Louisville, Chicago, and Detroit. By 1881, he was living in Cleveland and working at Weddell House, one of Cleveland's most famous hotels. Later, he opened a barber shop in Kennard House, formerly at West Sixth and St. Clair.

Eubanks was interested in politics and became the first African American vice president of the Ohio League of Republican Clubs. He ran twice for city council unsuccessfully, but was elected to the Ohio Legislature in 1903 and 1908. In the General Assemblies, he helped to secure a law that supplemented Henry C. Smith's anti-lynching law. The Eubanks measure authorized the governor to remove from office any sheriff who negligently permitted a lynching or who failed to protect prisoners in his custody. This piece of legislation brought Ohio law into harmony with state and federal constitutions and was endorsed by several other northern states.