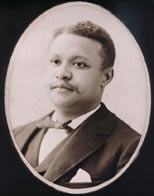 Henry Clay Smith was born in Clarksburg, West Virginia, in 1863. He moved to Cleveland, Ohio, as a child and remained there until his death in 1941. In 1882, only one year after graduating from Central High School, Smith established the Cleveland Gazette, a newspaper that became a bastion of militancy. For nearly sixty years, he remained at its helm as publisher and editor. He never married, and early in his career he involved himself in Republican politics, becoming a close friend of State Senator John P. Green.

Smith was a powerful orator and through his speeches rendered valuable service to the Republican Party. In return for supporting Joseph Foraker's gubernatorial bid in 1885, Smith was appointed Deputy State Inspector of Oils. He was the first African American to hold the post, and he remained in the job for four years. In 1894, with help of Marcus Hanna, he was elected to the Ohio House of Representatives, and subsequently won re-election twice.

He was an unyielding foe of discrimination and unfairness. One example is his alliance with Albion W. Tourgee in the fight to outlaw Jim Crow railroad facilities. As a legislator, he helped enact the Ohio Civil Rights Act of 1894, which prohibited discrimination on the basis of race or color in public accommodations and provided for fines on proprietors who violated the law. He authored the Anti-Mob Violence Act of 1896, defining a mob as two or more individuals. Smith also fought attempts by the legislature to enact an anti-intermarriage law.

In the 1890s, Smith picked the morally right but losing side in a political battle that was shaping up in the Ohio Republican Party. An outspoken supporter of the Foraker faction, he strongly criticized the Marcus A. Hanna machine. As a result, he found himself increasingly alienated from the main sources of political power in the state, as well as from the many African American politicians who continued to support Hanna.

By 1908, Smith had become disenchanted with the GOP's racial policies. Theodore Roosevelt's dishonorable discharge of three companies of the black 25th Infantry following the Brownsville, Texas riot in August, 1906, particularly infuriated him. Smith urged blacks to register their protest by voting against Taft. He also urged blacks to boycott Cleveland's Luna Park because of its mistreatment of African Americans.

Smith returned to the Republican fold during the Wilson administration, but beginning in 1920, he again openly criticized the party. He sharply rebuked the Harding and Coolidge administrations for perpetuating a policy of segregation in the federal government and for the military occupation of Haiti. More significant was Smith's opposition to Republican leadership at the state and local levels. As he called attention to declining black patronage and the failure of GOP leaders to support more blacks for political office, Smith ran unsuccessfully as an independent for city council in 1921.

Smith also entered the GOP primary race for secretary of state in 1920 and for governor in 1922, 1924, 1926, and 1928, because he wanted to demonstrate that blacks had the right to run for any state office. While he lost these contests, his involvement both spurred the growth of a black insurgency in the Ohio Republican Party and helped lay the groundwork for the African American exodus from the GOP in the 1930s. Ironically, Smith himself chose not to participate in that exodus. Citing the power of southern Democrats and Franklin Roosevelt's failure to deal with lynching and segregation, the Gazette editor continued his support of the Republican Party.