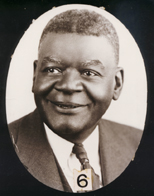 Rev. Jacob Ashburn, Jr. was a prominent community leader in the Hilltop area of Columbus. He was pastor of the Oakley Avenue Baptist Church from 1917 to his death in 1955. Every year, Rev. Ashburn visited every family living in his predominantly African American community. He was a gifted speaker at local civic and school meetings and was the first African American to deliver a baccalaureate sermon at West High School.

During World War II, Asburn was a member of the Selective Service Board. In 1945, he was elected on the Republican ticket to the Ohio House of Representatives. During his term there, he served on a number of key committees: Commerce and Transportation, Education, Liquor Control, and Public Welfare.

He gave of himself to a variety of organizations and causes. He was on the board of directors for Central State University; he served as a trustee of the Ohio Baptist General Association, and he was treasurer of the Sunday School State Convention. He was a member of the Columbus Urban League and the National Association for the Advancement of Colored People.

His influence continues to be felt through the efforts of his son, the Rev. Jacob Julian Ashburn. He took over his father's pastorate in 1955 and founded the J. J. Ashburn Jr. Youth Center in the Hilltop community. Presently, the Hilltop Reunion Committee is planning development of a park on the former site of the Oakley Avenue Baptist Church.