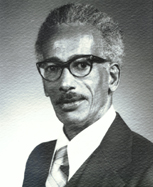 "People are more important than things," Rep. James A. Rankin said frequently. Elected to the House of Representatives in 1970, Rankin brought the sensitivity of a social worker to his job at the Statehouse. He fought for increased funds for education and Aid to Dependent Children, as well as for better treatment of the mentally ill and retarded. He consistently opposed utility rate hikes. Rankin even used his own money to help some of the underprivileged people in his district attend college. In 1978, at the time of his death, the Cincinnati Enquirer proclaimed Rankin "Friend of Poor."

Rankin was born in Cincinnati and attended Cincinnati Schools. He graduated from the Ohio State University's School of Social Work and also attended the University of Cincinnati. He and his wife Helen had three children: James Jr., Sharon, and Connie. Before his election to the House of Representatives, Rankin was a social worker and at one time supervised the Seven Hills Neighborhood House.

Rankin ran for office because he wanted to help the poor actively participate in the political and governmental processes that directly affected them. He introduced legislation to protect the jobs of public employees by forbidding the state to "cater out" for services that could be performed by state workers. To demonstrate his support for them, Rankin marched alongside striking hospital workers. He also was interested in health issues and supported legislation to help fight sickle cell anemia.

Frank and outspoken, Rankin had a key role in the legislation that created the Martin Luther King Jr. Day. Speaking to his colleagues about establishing a day to honor Dr. King, Rankin said, "There are 10,000 monuments to war. Why shouldn't there be a monument to peace? We should leave here some evidence that causes cannot be murdered and dreams not assassinated."

Rankin was a member of the House Finance and Appropriations Committee and was chairman of its Human Resources subcommittee. He served on the Reference and Human Resources Committees and on the Select Committee on Medicaid. Rankin was also active in a number of organizations. He was a member of the Avondale Community Council, the West End Task Force, the Citizens School Committee, and the National Social Workers.

He died near the end of his fourth term in the House. Helen Rankin was appointed in September, 1978, to complete his unexpired term.

In 2022, an Ohio Historical Marker dedicated to the late state representative was placed in Evanston, Ohio. At the ceremony, Cincinnati Vice Mayor Jan-Michele Lemon Kearney explained that as Rankin envisioned a monument to the legacy of Dr. King, the historical marker memorialized the late representative’s own values as a passionate advocate for social justice.