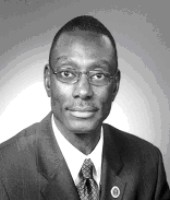 State Senator Mark Mallory represented Ohio's 9th Senate district in the Ohio General Assembly. He is a life-long Cincinnatian, born and raised in the West End. He is a graduate of the Cincinnati Academy of Math and Science and earned a Bachelor of Science degree in Administrative Management from the University of Cincinnati. The Mallory family, led by Senator Mallory's mother, and his father, former Ohio House Majority Leader William L. Mallory, Sr., along with the Senators' brothers and sister, are dedicated to public and community service. In 1996, the Mallory family was honored as the Black Family Reunion's "Family of the Year."

In his service to Ohio's General Assembly, Senator Mallory has championed the issues of education reform, consumer protection, prison reform, and crime prevention. He has been a vocal supporter of campaign finance and election reform, and is leading the charge for stricter regulations of the payday loan and rent-to-own industries. Senator Mallory also sponsored a bill, which passed in 2000, which would require prison inmates in the state of Ohio to pursue completion of their GED and/or continuing education programs. In 2003, Senator Mallory passed a resolution in the Ohio General Assembly ratifying the 14th Amendment, which guarantees Americans equal protection and due process under the law.

Senator Mallory also serves his community outside of the General Assembly. He is a member of the board of trustees for several organizations, including the 4C for Children Advisory Council and the Friars Club. He is also a member of the advisory board for the Ronald McDonald House of Cincinnati and Students in Free Enterprise. Senator Mallory has received numerous awards including the 1998 Meryl Shoemaker "Legislator of the Year" award, the 1999 Correctional Education Association "Excellence in Correctional Education" award, the 2001 National Association of Social Workers "Legislator of the Year" award, the 2002 Ohio Association of Election Officials "Wolfe Award of Excellence", the Ohio Library Council's 2003 Andrew Carnegie Award and the Legislator of the Year Award from the Ohio Community Corrections Association.

Mark Mallory left the Ohio Senate, and was sworn in as Mayor of the City of Cincinnati on December 1, 2005. Mallory is the first directly elected African American Mayor in Cincinnati's history.