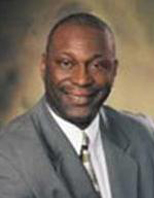 State Representative Michael Ashford (D-48th District) is serving his first term in the Ohio House of Representatives. He proudly represents more than 116,000 constituents in a district wholly within the city of Toledo.

Community service has been a hallmark of Rep. Ashford's career. He is a native of Omaha, Nebraska who graduated from the University of Nebraska-Omaha, and has a Master's Degree from Spring Arbor University. Rep. Ashford relocated to Toledo in 1988 as a Unit Director for the Homer Hannah Boys and Girls Club, and then later began working for the YMCA and JCC of Greater Toledo. He currently serves as Vice President of Urban Affairs for YMCA/JCC.

Representative Ashford has focused on bringing services to the community during a challenging economic climate where dwindling resources require dedication and leadership. He has also participated on many community boards during his years as a Toledo resident, most recently: University of Toledo Excel program, Partner in Education and Past Polemarch of Toledo Alumni chapter of Kappa Alpha Psi.

As a Toledo City Councilman representing District 4, Michael Ashford was first appointed to Council on January 2002, and then was honored by the support of District 4 residents in a special election and two general elections in 2003 and 2007 and served as president of Toledo City Council during 2007. He served as the chairman of the Public Utilities Committee during his Council service and campaigned for the passage of issue 79. Issue 79 was a ten year lawsuit by U.S. EPA against the City of Toledo to address and correct aging in fracture, sewage discharge, and combined sewer overflows. The project started in 2003 and will be completed by 2018, improving the quality of water there for improving the quality of life. He also oversaw the creation of a major entertainment district in Downtown Toledo. Then-Councilman Ashford tackled major budget issues while working closely with community development corporations and neighborhood organizations to secure dwindling government resources.

Rep. Ashford serves as Secretary of the Ohio House Finance Committee, which deals mainly with the state's budget, and is a member of the Public Utilities and Insurance Committees, as well as the Financial Institutions, Housing and Urban Development panel.

He is a proud trustee of Indiana Avenue Missionary Baptist Church and has worked with other area ministers and church congregations in his professional and public servant capacity on quality of life issues for Toledo area residents.

Rep. Ashford lives in the City of Toledo with his wife, Ruth, and their children in a home they have renovated in Toledo's historic Old West End.