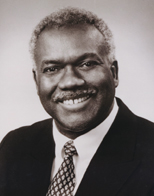 Otto Beatty was born in Columbus, Ohio, in 1940. Growing up in Columbus, he attended local schools and graduated from University High School. He earned a BA and an MA in business administration from Howard University and a JD from The Ohio State University College of Law. Beatty established a law practice and soon distinguished himself as an attorney. He served as president of the Franklin County Trial Lawyers Association and attorney for Black Elected Democrats of Ohio, which in 1995 became the Ohio Legislative Black Caucus. He successfully defended the first two discrimination cases filed in Ohio.

Voters elected Beatty state representative in 1979, and he served eighteen years in the legislature. He was a powerful advocate for minority business and the disadvantaged. He was a member of many committees, including Finance and Appropriations; Health, Retirement, and Aging; Rules; and Reference; as well as the Agriculture and Development Subcommittee. He also served as special counsel to the State Attorney General.

His leadership in the Ohio House was part of a long and effective career responding to the issues and concerns of Ohio citizens. He is no stranger to affirmative action and has often defended the disadvantaged. He has been honored at the local, state, and national level for his contributions to tort reform, minority business development, and health care. Beatty supports strong family values, works to improve the quality of life for children and families, and is a strong consumer advocate.