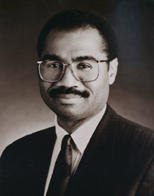 Vernon Sykes attended The Ohio State University, where he received a BBA in Organizational Behavior. He earned an MS in Economics from Wright State University and an MPA from Harvard's JFK School of Government. Currently, he is pursuing a PhD in Urban Studies at University of Akron.

Sykes has always been interested in public affairs. He served on the Akron City Council prior to his election to the Ohio House of Representatives. In the House, Sykes sponsored legislation to toughen child abuse laws, to compensate wrongfully imprisoned individuals, and to prevent railroad crossing fatalities. Among his most significant accomplishments are his advocacy for advanced practice nursing; House Bill 321, the strongest fair housing law in the nation; and House Bill 111, establishing the open meeting requirement. He has served on several key committees: Financial Institutions, Housing and Urban Affairs, and Economic Development and Small Business.

Sykes has been president of Black Elected Democrats of Ohio, which became the Ohio Legislative Black Caucus in 1995. He is a member of the National Black Caucus of State Legislators.

Mr. Sykes is married and has two children.