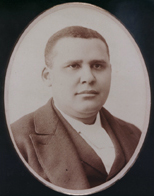 Born during a period when African Americans had few opportunities, William Clifford nevertheless distinguished himself through hard work, education, and political leadership. A native of Cleveland, Clifford worked for seven years for the Woodruff Palace Car Company. In 1886, he married Carrie Williams; the couple later had two children. In 1888, he took a job in the county clerk's office and soon was promoted to cost clerk, thus becoming the highest-ever paid black man in local, county, and state government.

He held various offices in the Republican Party, served as assistant sergeant-at-arms at the 1896 and 1900 Republican National Conventions, and served two terms in the Ohio House of Representatives. Along with Representative Henry Clay Smith, Clifford submitted an anti-lynching bill in 1894, but because of some division among African American supporters, the measure did not pass until the following General Assembly. In January, 1898, Clifford helped shape American political history by casting the deciding vote in the election of Marcus A. Hanna to the U.S. Senate. Hanna formed a powerful political machine that influenced American law and policy for decades.

In 1902, Clifford graduated from Cleveland Law School. In 1908, he was appointed to a position in the auditor's office at the War Department in Washington, DC, a position he held until his death. Representative Clifford is buried in Woodland Cemetery.