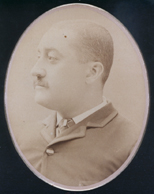 William H. Copeland was born to William Copeland, a painting contractor, and Mary Copeland on July 30, 1848 in Columbus, Ohio. Young Copeland attended public schools and, while still a teenager, joined the Quartermaster Department at Camp Chase during the Civil War. After the war, he was a porter and brakeman on the Ohio & Pennsylvania Railroad for fifteen years. He is considered by many to be the first African American parlor car conductor.

Copeland married Ivanora Lindsey of Kentucky. He was a member of the Episcopal Church. He achieved the 32nd degree as a Mason, was a Past Commander of the State of Ohio Knights Templar, and was one of the four founders of the Young Men's Blaine Club.

During the presidency of Chester A. Arthur, Copeland became the first African American to serve a U.S. Gauger or exciseman. In his varied career, he also owned and operated a café and worked as a deputy sheriff. In 1915, he opened an undertaking establishment.

Amidst his many enterprises, he was elected to the State Legislature by citizens of his district in Cincinnati. He served from 1888 to 1889, during the 68th General Assembly.