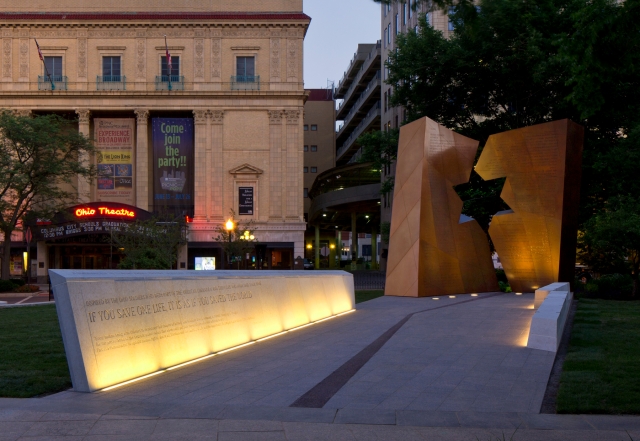 Ohio Holocaust and Liberators Memorial Photography© Brad Feinknopf 2014
The Capitol Square Review and Advisory Board (CSRAB) has dedicated a new memorial on Capitol Square. The Ohio Holocaust and Liberators Memorial was unveiled by Governor John Kasich and architect Daniel Libeskind during a ceremony held at the Ohio Theater and the South Plaza of the Ohio Statehouse today.

The ceremony was the conclusion of a three year process that began May 4, 2011 when Governor Kasich proposed a memorial to remember Ohio Holocaust survivors and Ohio World War II veterans who liberated thousands from Nazi death camps in the spring of 1945. In March 2012, Governor Kasich signed legislation authorizing the creation of the memorial with oversight of the project being given to the Capitol Square Review and Advisory Board and the Ohio Arts Council.

Located on Capitol Square, visitors to the memorial will enter a sloped platform of smooth reddish-grey granite that leads to the monument. The pathway is flanked by benches and a descending wall of Columbus limestone. The top of the wall is inscribed with the words, “If you save one life, it is as if you saved the world...” and below on the stone is the inspirational quote by Auschwitz survivor Avner Shalev that reads:

“Every human being who chooses to remember this chapter of history and to infuse it with meaning is thereby choosing to struggle for the preservation of the bedrock moral values that alone make possible the existence of a well-ordered society. This is a commitment to uphold human rights, above all, freedom and the sanctity of life, and the opportunity for people to live side by side in harmony.”

A fissure created by rough stone fractures the path down the center and leads visitors to the top, where two 18-foot-high bronze monolithic forms are positioned at a 45 degree angle to one another. The line ascends the center of the monument to a cut-out form of a bisected hexagram star lined with contrasting stainless steel, which offers a skyward view.

Etched on the face of the bronze monument is the inspirational story of two Auschwitz survivors. The narrative recounts the bravery that Michael Schwartz and his cousin demonstrated during a work camp selection session at Auschwitz in the fall of 1944. Michael saved his cousin’s life by transferring an ink star on his forehead to his cousin’s forehead in defiance of his Nazi oppressors. Through this short story the reader is stuck by the death and despair of Auschwitz and inspired by the courage and strength that Michael and his cousin show in the face of evil.


*The monument was moved to the Ohio Statehouse in 1932 from Pontifical College Josephinum (Worthington, OH); 1992 rededicated in its current form.

Watch the Ohio Holocaust and Liberators Memorial groundbreaking at:
http://www.ohiostatehouse.org/galleries/media/governor-john-kasich-holocaust-liberators-memorial-groundbreaking-ceremony

To view this press release and others, visit www.ohiostatehouse.org.