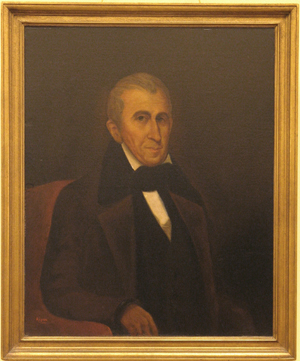 Representing North Bend, Ohio, Harrison served in the Ohio House of Representatives from 1816 to 1819 and the Ohio Senate from 1825 to 1828. He became the ninth President of the United States on March 4, 1841 and died on April 4, 1841. He was the first U.S. President to die in office, only one month into his presidency. Though he gave the longest inaugural speech of any president in history (8,445 words), he served the shortest term of any president. He was also the first president to use campaign slogans - "Tippecanoe and Tyler Too." He and his grandson Benjamin Harrison are the only grandfather-grandson duo to serve as Presidents of the United States.

Items on display in the Harrison Room include: